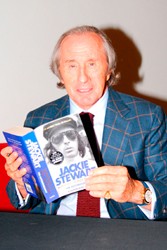 Born in 1939, Sir John Young “Jackie” Stewart, aka the “Flying Scot,” has been ranked fifth in the fiftieth greatest Formula Drivers of all time, and is esteemed by many as one of the greatest figures of all time in motor racing.

Jackie Stewart was born into a family of successful car dealers, motorcycle racers, and race car drivers, exposing him to the world of racing at an early age. As a young man, he worked as a mechanic, tested cars, and eventually turned to professional racing.

In 1964, he signed with Ken Tyrell’s Formula Junior team and drove in Formula Three, showing his extraordinary skill right out the gate with a 44-second cushioned win. This got him a near-immediate offer to ride with Cooper in Formula One, but he declined, wanting to first establish more experience with Tyrell.

During this time was when Stewart had his amazing performance at Nürburgring. In rainy and foggy conditions, he won by a margin of four whole minutes. It is Stewart who also gave Nürburgring its infamous nickname of, the “Green Hell.” He stated that it was “the greatest and most challenging race circuit in the world.”

In 1966, he participated in the Indianapolis 500, nearly winning it in his first try except for a mechanical malfunction that cost him the lead. However, his performance won him the “Rookie of the Year” award. From then on, Stewart consistently dominated the competition and setting new records. At last, he became world champion in 1969, driving a Matra MS80-Cosworth—making him, to this day, the only driver to win the world championship in a French-built car.

After surviving a severe crash in during the Spa-Francorchamps in 1966, Stewart went on to establish himself as a spokesperson for driver and racing safety. He went on to propose mandatory seat belt usage, full-face helmets, and track modernization. His outspoken efforts soured his reputation among track owners and race organizers, but despite opposition, it was Stewart’s hope that…“If I have any legacy to leave the sport I hope it will be seen to be an area of safety because when I arrived in Grand Prix, racing so-called precautions and safety measures were diabolical.”

Will 2017 be the year Radical is finally de-throned from #1?

Thank you for voting
You have already voted on this poll!
Please select an option!
View Results Hide Results