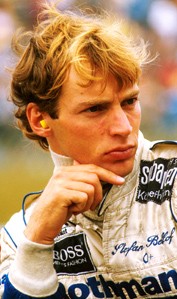 Nürburgring’s establishment as a fixture in the history of racing is only in part due to its reputation as an extraordinarily difficult track to drive. It is also only due in part to the incredible lush scenery that lines the entire track. But what sets the Ring apart is…of course…the drivers who have braved the circuits time and again over the decades. Without them, Nürburgring would only be a strip of asphalt. It is the drivers and racing teams who brought the track to life and cemented its cult fascination, drawing countless fans to the asphalt every year to relive the thrills in their own unique way.

Throughout the course of its legendary history, the Ring has had its fair share of racers who have dominated the track. Racers who performed so far ahead of everyone else that a new title was established simply to give them honor they deserved: Ringmeisters (Ringmasters). In the 80+ years of its operation, Nürburgring has seen a handful of such Ringmeisters rise to extraordinary fame, each contributing in their own unique way to the Ring’s fame.

These Ringmeisters have emerged in each generation of racers, from the 1927 founding of Nürburgring itself to modern day. These are the drivers who drew massive crowds, constantly set new records, challenge industry standards, and infused the racing industry with undeniable energy. Drivers who have lived, raced, and even died on the Ring. If you visit Nürburgring today, you can go to the museum and see life-sized models of these Ringmeisters in all their glory.

Let’s look at a number of these in more detail. As you discover the personal history of each Ringmeister, imagine the roar of both the crowds and the engines as these racing greats soared around the circuit, perhaps never imagining how far their individual legends might travel through time.