Sabine Schmitz – Queen of the Nürburgring 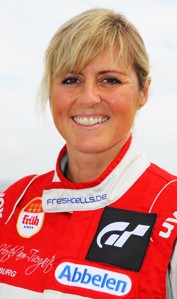 Sabine Schmitz holds an incredibly personal connection to Nürburgring thanks to her unique upbringing and star personality. Born to a family that owned a local hotel and restaurant in Nürburg, she was exposed to the cult fascination with the Ring as a child, which ended up guiding her career in the long-term. At first, she went on to work as a hotel manager and sommelier, marrying and divorcing while owning a bar-restaurant alongside the Nordschleife track.

However, alongside those jobs, she, as well as her two sisters, got involved in car racing; but Sabine alone racked up a notable reputation. She took first in CHC and VLN events, such as the VLN 1998 endurance championship, and, in 1996. also became the first woman to win a major 24 hour race, the 24 Hours Nürburgring. In 2006, Sabine co-drove the #97 Porsche 997 in the Nürburgring VLN endurance racing series, taking third.

Her notoriety grew when she began driving the BMW “Ring taxi” around the 20.8km Nordschleife circuit, giving fans tours of the famous track in an exciting and entertaining manner. She estimates that she has driven the track more than 20,000 times to date, and each year added approximately 1,200 more drives to that count, though she stopped being a driver herself in 2011.

Her extreme confidence and comfort in driving the course has earned her the unique titles of “Queen of the Nürburgring” and “fastest taxi driver in the world.”

She went on to establish her own company in Nürburgring, Sabine Schmitz Motorsport, which provides advanced driver training and Ring taxi service. Thanks to a charismatic personality, Sabine became a popular co-host on the German motoring show, D Motor, in which she took on various racing challenges each episode. She has appeared on shows such as BBC’s Top Gear and Supercar Showdown.